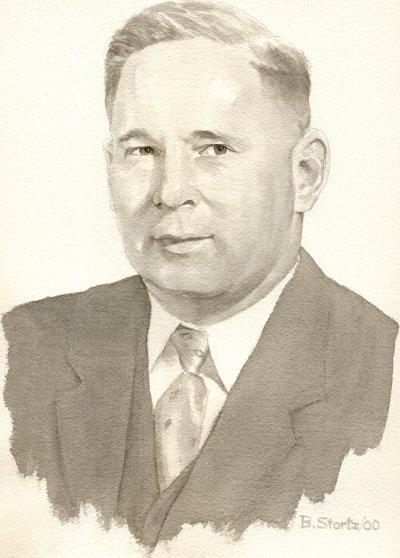 The headlines of Saturday, April 15th, 1916 spoke of guns artillery and victorious advances by the Allies in WWW I. If you were only a headline reader, you would have missed the birth notice of a man whose contributions would be felt for many years: W. Lawrence Groves was born that day to Mr. & Mrs. William Groves.

The Groves name is synonymous with Sewer work. W. Lawrence Groves joined his father=s business causing the name to change to W. Groves & Son, Sewer & Cement Contracting. His father William and he had the same first name. Perhaps avoiding confusion, William Lawrence Groves went mostly by the name Lawrence although in construction circles he was better know as William.

Forged at a young age, the character of Lawrence Groves is a humble with a work ethic capable of building a respected contracting business. The depression, a love of scouting and respect for its tenants, a natural sense of humor and a love of family and community are the pillars upon which he made his contributions.

When installed, our sewer infrastructure remains unseen, unheralded; a quiet worker which is all important to the comfort and health of our community. For Lawrence Groves, his company’s contributions to the community are unseen, perhaps unheralded and yet as important as any tall building or industrial facility rising above our landscape. Lawrence Grove understood this and carried on the family business with dignity and selfless concern for the people whose lives were made better by a job done well. Not content to do only these things, Lawrence Groves sought other opportunities to contribute and some of these works have resulted in distinct legacies.

He understood the value of unsung contributions just as he knew the worth of the work of W. Groves & Son. When he assumed leadership of the family business, he changed the name to W.L. Groves Cement and Sewer. He grew the business and his success provided the freedom to contribute more to the community he loved, to the industry from which he earned his keep, and the family he wanted to provide a future.

He joined the East Hamilton Rotary Club in 1961 and only a few short years later, 1964-65, he served as club President. Other Rotary involvements included serving on the Associated Service Clubs for the Greater Hamilton, chairman of the International Youth Exchange Programme and Rotary Travelogue Programme for his club. He served as Rotary District 709 Chairman. During this time, he and his wife Marguerite, were constant hosts to other visiting the area. He made equally significant contributions to the Masonic Lodge rising to the position III. Bros. W. Lawrence Groves, 33.

Lawrence Groves devotion to the construction community continues to this day. After several years of contribution, he was elected HCA Honourary Treasurer in 1950, Vice President in 1951 and President for 1952. In those days, the local industry had very distinctive leaders among several general contractor firms. They accepted the leadership of Lawrence Groves, a sign of the respect which he garnered and endeared him to the industry. As further proof that this respect was properly earned. Lawrence Grove, except for ill health, has attended nearly every HCA Annual Meeting since 1952 – over 45 years of dedication and support to the industry.

In the year he was President, Lawrence Groves worked to improve the labour relations and safety of the industry. He was instrumental to creating an environment of comradery among the generals and trade contractors. During that year, he encouraged the creation of a Ladies Night in conjunction with the Annual Meeting and despite the opposition, he was successful in achieving the support of Joseph Pigott to head the event and with that gained the support of all.

The cooperation extended to assisting in those days firms with contract problems and the Board discussed items such as the withdrawal of a low, by $15,000, electrical bid, problems with accurate drawings from architects, holding of bid security longer than necessary and slow awards of contract. He continued to serve on the HCA Executive through 1961 and as representative to the Construction Safety Association of Ontario