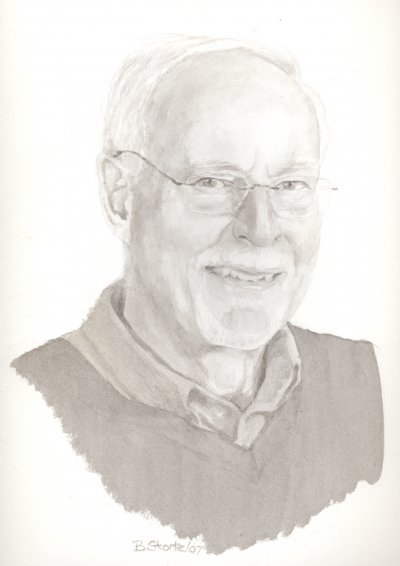 From his homeland in Cambridge, England to his adopted home in Hamilton, Canada, Trevor Garwood-Jones took what may seem an improbable route to becoming a world renowned architect and pre-eminent design professional. And in the process, all of us who live and breathe construction, gained a great friend and advocate for the City of Hamilton.

Trevor began his architectural practice in the early 1960’s, and in 1969 in the City of Hamilton, hung up a shingle under the name Trevor Garwood-Jones Architects Inc. Trevor set about making a name for himself by virtue of his tremendous work ethic, and he assumed a leadership role in the 1970’s redevelopment of Hamilton’s downtown core. Today, he continues his quest for excellence in design and service to clients, through his partnership at Garwood-Jones & Hanham Architects.

Trevor has always believed that the client’s needs and satisfaction were paramount to a successful design relationship. He knew the client’s vision is best achieved through extensive research and the forging of a skilled team of professionals to see a concept through to its’ completion. Trevor’s unique gift for research is legendary. From traveling the world to find the right design elements for one of the best theatre auditoriums in the world, (Hamilton Place Theatre), to personally adopting a wheel chair to experience first hand the challenges of those with special needs. Trevor took nothing for granted.

The “fruits of his labour” are as varied as the list of projects is long. He has shared his tremendous gift of creativity with our community, touching many different “walks of life” by influencing and creating approximately 65 places of worship, health care institutions (acute care, speciality hospitals, nursing homes and long term care faculties), libraries, educational faculties at every level, cultural & recreational buildings, other government buildings, and structures specifically designed to suit special needs Canadians.

Over the years Trevor has been recognized with many awards including the 25 Year Award from the Hamilton and Burlington Society of Architects in 2003, the 1979 OAA Award Design Award for the Hamilton Art Gallery and in 1993 the Canadian Architect Award of Excellence for the Salvation Army Community Housing and Church project.

Trevor gives back to the field of architecture through his association with many professional groups including the Council of the Ontario Association of Architects, as well as his pursuit of academic excellence by authoring a vast number of papers and articles for the Architectural Association School of Architecture in London, England. Trevor is also a visiting architectural critic at the University of Waterloo. He is a recognized community leader, volunteering much of his time to local service groups and clubs including, Rotary (Past President), Dundas Valley School of Art, Hamilton Philharmonic Orchestra, and the Ontario Government Trillium Foundation.

Trevor’s philosophy, training and experience were central to the design of many great structures, both big and small, in the Greater Hamilton and Burlington area. He has mentored, supported and fostered the professional growth of many of the area’s top architects. Trevor’s name is synonymous with excellence in design and structure, and he has left an indelible mark on his adopted home, the City of Hamilton. We are most pleased to welcome Trevor Garwood-Jones as a member of the Construction Hall of Fame.