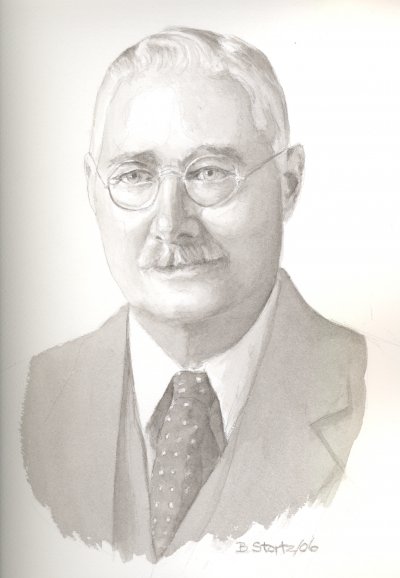 Like many immigrants, Sackville Hill endured long hours of hard labour to build a life in Canada. The magic of his life is how he was able to change a penniless life into a flourishing building supply business that would serve a myriad of Hamilton and area construction projects throughout the 20th Century.

Sackville Hill arrived in Canada in 1883, a seventeen year old lad from, England. He laboured on the Grand Trunk Railway for one dollar a day, from seven in the morning till eleven at night, six days a week. At the age of twenty-four, he married Sophy Kittleman and together they would have nine children. While little is known of his life before 1907, it is in that year that he opened Sackville Hill Builders’ Supply on Elgin Street. Perhaps his work on the railroad offered the idea that Hamilton was a town primed for expansion. Having been listed in the City Directory as a Lime Agent for 10 years, Sackville took a chance that builders of Hamilton would require various supplies and he started by stocking cement.

He took his first order for cement to the Hamilton Blast Furnace Company (later to be Stelco) by horse and wagon. The company asked him to take payment in shares, however, he required cash to purchase more materials for sale, so he declined the share offer. His other early notable orders of cement were for the heavy stone weights used on the old canal bridge. He also supplied all of the sewer pipes for the Kenilworth HSR beltline. Over the years, the company prospered and eventually built two additional builders’ supply yards; one on Upper James Street and one on King Street East.

Sackville did a great deal to bolster the Hamilton economy and was very generous to those who needed and those who would benefit from help. There were many legacies left in his will when he died in 1950, and these are a testament to a man who wanted others to benefit from his good fortune. Shortly before he died, he announced a donation of twenty (20) acres to the City of Hamilton and a $75,000 gift to fund the development of a park on the site. The park, at the suggestion of Judge Schwengar, a Parks Board member, would be named Sackville Hill Memorial Park. In 1954, property adjacent to the park was selected for a new school with the agreement that the Sackville Hill Park land could be used by the school for track and field activities, the school was named Hill Park Secondary.

Mayor Lloyd D. Jackson said in 1950 “Mr. Hill’s donation to the City was one of the finest ever made. I may never see it but future generations are going to have here, as fine a recreation grounds as there is anywhere in the City.”

Sackville’s passion was in business and community, where he donated and helped others. Sam Manson, a famous Hamilton sporting goods businessman, was quoted as saying that Mr. Hill offered financial assistance on more than one occasion but ‘insisted that he remain anonymous’.

During his lifetime, Sackville Hill was a member of the Masonic Lodge of Strict Observance, a member of St. Peter’s Anglican Church, a founding member of the Hamilton Construction Association, serving on its Business Relations Committee during the 1920’s.

As an astute business man and benefactor, Sackville Hill contributed a great legacy to the Hamilton area that survived him for many years. His family continued to operate the Builders’ Supply business that proudly bore his name until 1978 when his grandson’s retired.

Today, a portion of the land that he donated houses the Sackville Hill Seniors Centre. The Park continues to be used by many area residents for athletic and recreational enjoyment.