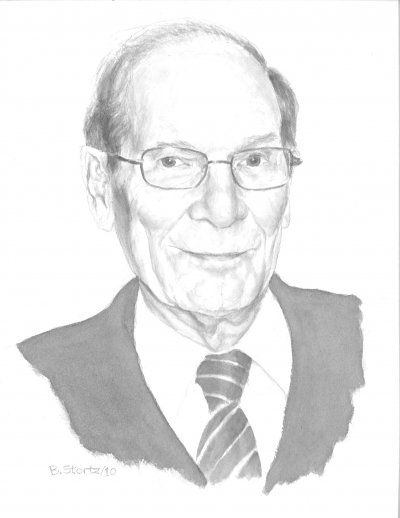 Only one can imagine what a community would be like if an event had not unfolded as it actually did. Across this country, and particularly in the greater Hamilton area, organization exists because of the vision and persistence of Don Stewart, the result of his immigration to Canada. Don Stewart’s work on many interesting, long standing projects and his determination to create active, worthwhile industry associations are rare qualities which we recognize as leadership. He began a career journey with C.B. Jackson in England, where he worked starting in 1953 as a Design Engineer on many United Kingdom projects.

A 1957 move to Canada was intended to be a short five years, however, he “succumbed” to the Canadian lifestyle and we have benefited. Don displayed his leadership qualities as a Mechanical Project Manager for major projects in Canada, the United States and Jamaica from 1957 through 1961 when he then became manager of the Hamilton mechanical division for the Canadian Comstock company, a role he held until 1965. During his tenure there, Don was selected to be Comstock’s representative to the Canadian Plumbing and Mechanical Association (CPMCA) and elected to its Board of Directors. This was the launching platform for Don’s direct involvement, in many changes, leading to birth and growth of the Mechanical Contractors Association of Hamilton (MCAH).

The year 1965, and Don Stewart once again demonstrates his entrepreneurial leadership qualities by making a career move to Aldershot Industrial Ltd. where he was responsible for start-up of a mechanical division. He demonstrates this same entrepreneurial spirit and the courage of an educated risk taker opening his own company, Robert D. Stewart Mechanical Contracting Ltd. in 1970. It was a period of economic uncertainty, and Don learned the value of knocking on every door, more than once, to gain the attention of buyers for his services. As he gained opportunity, he also gained respect from clients such as Stelco, Dominion Glass, and Yale Properties. Despite a slow economy and the threat of failure, Robert D. Stewart Mechanical Contracting Ltd. prospered with Don’s leadership and determination. He sold the company as a going concern.

The success of his company allowed Don to contribute in a passionate way to volunteerism with the mechanical contracting industry, provide for his family and contribute to the growth and prosperity of those with whom he worked. Throughout his career Don Stewart has overseen and managed many large projects, here and around the world. Locally, such projects as the Lloyd D. Jackson Square, where he was involved in the pre-construction work for fire hydrants, tenant sprinkler systems and plumbing. Included in his resume is the Canada Life Building retro-fit for air conditioning, touted as the first million dollar project of its kind, the seven and a quarter million dollar Royal York Hotel mechanical renovation, and his work in Jamaica shortly after arriving in Canada.

In the mid 1960’s Don was a catalyst in creating the Mechanical Contractors Association of Hamilton, which itself was a catalyst for renewed interest with provincial, national and local mechanical contractor associations across Canada. Along with the many tradepersons, contractors, and suppliers who have and do benefit from those organizations, contributions to professional development, safety, security, financial well-being and education owe a debt of gratitude to Don Stewart.

While a young manager, Don began a 30 year volunteer effort within his business industry by writing a letter that brings together seven other contractors, uniting them in the formation of the Mechanical Contractors of Hamilton (MCAH). The small group adopted an official name, constitution and by-laws, and after a short time working from Doug Townend’s office, rented space in the TH&B Railway Station. Over the years of service Don would serve twice as President, on each and every committee and help institute important achievements for the Associations. Implementation of the Promotion and Education “funds” (today referred to as the Industry Fund), formation of the first negotiation teams, a labour relations committee, initiation of formalized apprenticeship programs in response to negotiated collective agreement terms and also the formation of a partnership to create Construction house.

Don served on the MCA Ontario Board, and ultimately served as President. He represented the industry at the Council of Ontario Associations (COCA) and served in the important and influential WCB Committee Chair position.

The industry focus Don had supported the work he did on significant landmarks, and his desire for industry innovation. For the contributions he was able to make the building of our community, the industry and its partners we welcome the induction of Don Stewart into the Hamilton-Halton Construction Hall of Fame.