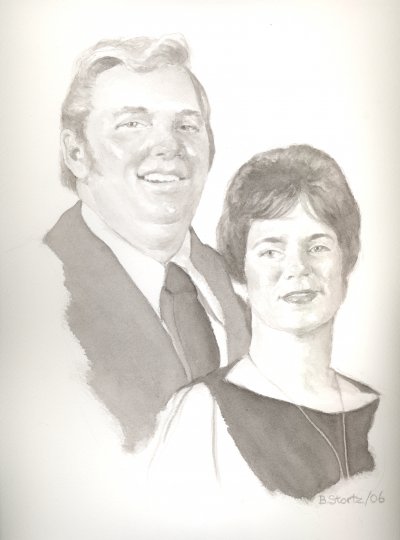 P.J. Daly and Sons, later to become P. J. Daly Contracting Limited, began as a vision of two young and enterprising people. They were partners in business, and partners in life. With determination Pat and Anne Daly created a successful drywall contracting business, raised a family of community-minded and successful business people in their own right, and contributed significantly to the buildings that we work, learn, live and play in.

On June 9, 1952 a young 16 year old Pat Daly married 18 year old Anne Gibson. Four sons would arrive from 1953 to 1959: Michael, Matthew, Patrick and Daniel. Pat had been working for Passmore Brothers Plastering, when he and Anne, newly married, decided to open their own business. With a young family to provide for, and difficult times, Pat and Anne moved the family out west, only to find the harsh winters less appealing than home. The return to Hamilton and its construction market of the early 1960’s had its challenges, so Pat took on hourly work at Dofasco, continuing his plastering work on almost all of his days off.

Son Michael died in a tragic farm accident in 1966. The loss of a child is always life altering, and Pat and Anne took great solace in their faith to overcome the difficult times. They also poured their energy into the creation of the new firm, P. J. Daly Contracting Limited as a way to provide for the family and raise their children. As their sons acknowledge, each one has fond memories of traveling to the bank with mother Anne or to estimate work with father Pat. Anne and Pat involved their children in the business, which proved to be great foresight on their part as their children gained a solid foundation in the family business.

Their first major project, and one they attributed as the start of the real business growth to success, was the lath, plaster and stucco work for a new Catholic Church, St. Margaret Mary in 1967. Confident with the ability to perform more ambitious work, the firm grew to complete many notable buildings, including Westdale High School renovations, Mississauga General Hospital, Sudbury Taxation Centre, Bank of Canada (Ottawa), T.D. Tower #4, Copps Coliseum, Hamilton Market and Library, Hamilton Convention and Trade Centre, Mississauga Civic Centre, and Canada’s Wonderland.

Pat and Anne were innovative. They saw the coming of steel studs, acoustic ceilings, drywall and the advantages of equipment such as plaster pumps and spray equipment to improve production and the quality of the workmanship. They saw opportunity in asbestos removal, a “messy” job that they could do to serve clients.

Pat Daly died suddenly in 1985. The sound planning and approach to business that was the foundation of Pat and Anne’s success allowed Anne and the family to carry on and grow the business further. The company continued major project work such as Hamilton General Hospital, Pantages Theatre, London Cancer Clinic, T. D. Tower #5, Terminal 3 at Pearson International Airport and many more.

Anne was recognized for her industry leadership with the Association of Wall and Ceiling Industry International’s “Unsung Hero Award” in 1994 and the AWCI “Pinnacle Award” in 2002, the first Canadian and the first woman to receive this award.

Tragically, Anne succumbed to cancer in May 2002. Both Pat and Anne dedicated their lives to the business of plastering and drywall, among other pursuits. They offered their time to a number of industry associations, including the HHCA and the Acoustic and Drywall organizations. They focused the greatest of their attention on the family, all of whom now offer their own skills and investment in our community.