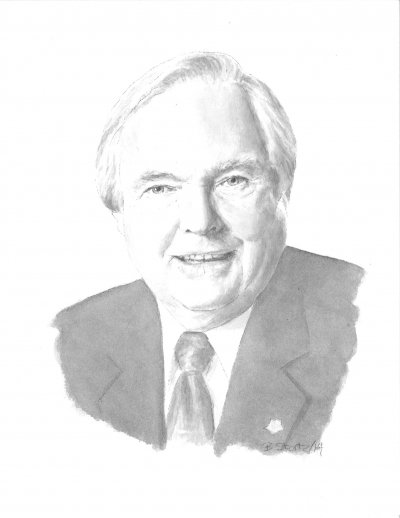 Lorne Hubber’s construction career spanned over 50 years. In that time he was known for outstanding qualities: generosity, integrity, and leadership. From conversations with those who worked with or know Lorne Hubber, two attributes stand out above all others – Lorne was a hard worker with a good head for business. From humble beginnings, progressing to ownership Lorne and his partner and company co-founder, Bob Graham built Lancaster Sheet Metal into a thriving and productive company which carries on a tradition of quality work, for fair price, with a focus on service to the client and safety in the workplace. Throughout his years with Lancaster, Lorne led by example and demonstrated compassion for all those he worked with.

Born in 1939, Lorne is one of six children of parents that influenced his life decisions. The son of Alfred Samuel Hubber, his father set an early example of dedication to hard work as a garage employee, member of the Royal Canadian Navy (stationed in Nova Scotia) and later as a Stationary Engineer. Alfred’s example of spending quality time with his family, whether fishing, gardening or playing sports with his children, also influenced Lorne’s attitudes about business and working with others.

Those same attributes and passions can be found in Lorne, and which he demonstrated in business and while raising his family. Lorne met his bride Liz Berscht at Edinburgh Square in Caledonia where he played second base for the Caledonia Clippers. Lorne and Liz have been married for 50 years. They raised three children and have 7 grandchildren. Lorne is loyal fan of the Hamilton Tiger Cats and has been a subscriber for over 50 years. The Tiger Cats figured prominently on both sides of the family for many generations.

Throughout his career Lorne was a keen volunteer in the construction industry and in the community he lived in. He served as Chairman of Haldimand Hydro for over 30 years and is a Life Member the Caledonia Kinsmen. Lorne was instrumental in starting the Ontario Sheet Metal Association in 1971 and was the first president. As an active member of the Hamilton and District Sheet Metal Association, Lorne represented local contractors on the Ontario Sheet Metal Labour Relations Council for over 20 years. He served well the needs of all Sheet Metal contactors in his work with the Hamilton Bid Depository. Lorne was a key and powerful voice in the establishment of Construction House and was president of the Hamilton-Halton Construction Association when Construction House opened in 1984.

Over the years, Lancaster has worked for a variety of customers and on a broad range of projects in the ICI sector. Three projects that are particularly noteworthy are:

These projects and numerous others over the years contribute the company’s legacy.

Due to Lorne’s love of family and business, his children are involved today in the business, advanced the idea that business is about family.

In all of his endeavours, Lorne demonstrated the qualities one would expect from an industry leader and which sustained him in the very positive growth and respect for the work of Lancaster Sheet Metal until his retirement in 2010. These same qualities resound for us today as induct into the Construction Hall of Fame Lorne Alfred Samuel Hubber.