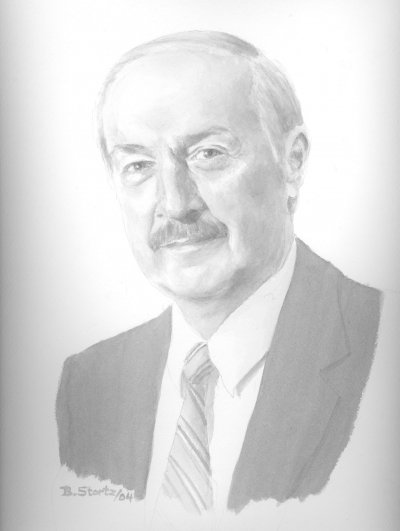 Ken Niepage’s construction career spanned over 40 years. In that time, he was known for outstanding qualities: patience, good judgement, and leadership. From conversations with those who worked with or know Ken Niepage, one attribute stands out above all others – an ability to know what to say, when to say it and, more importantly, when it was not necessary to speak at all.  Throughout his years with Adam Clark Company Ltd., from tradesperson to Chairman of the Board, Ken’s endearing nature was a foundation for solid leadership.  He led by example, using vision and compassion for others as a compass for his actions.

Born in 1935, Ken is one of four children raised in a construction company family. His father, Herb, was a contractor and Ken’s mother, Alma, who kept the books. They helped to make construction part of Ken’s life. He joined the United Association of Journeymen Plumbers and Steamfitters, Local 46, serving as an apprentice with Canadian Comstock Ltd. and then served three years as Superintendent with Industrial Mine Installations in northern Ontario.

With a child on the way, Ken answered an ad for a Project Manager position with Adam Clark which would allow him and wife Norma to be closer to home. Hugh Clark recalls that Ken was hired to assist the company to increase its project management skills, responding to the trend of major mechanical contractors to demonstrate greater project management leadership and responsibility. Ken fit the bill perfectly as he rose through the company ranks to be Assistant General Manager, Vice President, President and then Chairman.

Ken was influential in labour negotiations for over 35 years, 25 of them participating with the MCA Hamilton and Ontario bargaining group negotiations and similarly with the Millwright trade negotiations.   He chaired some of the negotiating teams, including the 1969 year of the MCA Hamilton lockout.  Those who speak about his contributions recall as their first memory, that Ken was a quiet observer who, at just the right moment, would add the wisdom of his observations to the discussions and usually help the group toward a satisfying negotiated settlement.  His approach won the respect of his colleague contractors and union counterparts alike.

It is these two areas of association involvement for which Ken is most widely known, for his leadership at Adam Clark was quiet in its nature. Although the company grew to international fame as a result of his undertakings, Ken was reserved in self-praise and quick to credit the work of others. Those who know him well praise his contributions at Adam Clark.

Through vision and hard work, Ken influenced the international advancements of Adam Clark.  Ken was the point person for the company’s first international project, a Water Treatment Plant project in Ghana and led the team responsible for one of the company’s most successful projects at the Kuntor Gold Mine in Kyrgyzstan. Working in these areas of the world was full of danger and sometimes intrigue. Ken’s attitude and steady, patient manner were essential skills leading to success and international renown given to both Adam Clark and Hamilton.

A second important contribution made by Ken related to changing company ownership. On two occasions, the company was bought by other interests; in both cases, Ken survived the changes and in the latter case was part of the 11-employee team to repurchase the company.  In all of his endeavours, Ken demonstrated the qualities that would lead him to be President of Adam Clark in 1988 and Chairman from 1997 until his retirement in 2002.

During his early years Ken continued to pursue his passion for hockey, playing Junior “B” Hockey in Woodstock and in an “industrial league” on a team sponsored by “Niepage Construction”. He used his love of the game to coach minor hockey as he raised three children (Lori, Lynn and Ray) with his wife Norma. He also raced stock cars with a brother before being married.

A consummate gentleman, Ken is noted for saying little. His family, friends and colleagues have come to understand that when he does speak, it is worth listening. Over many years he has demonstrated the leadership, vision, ethics and contribution to the construction community that has moved us forward and upward. It is with appreciation for these gifts to the industry that Kenneth Norman Niepage is inducted in into the Construction Hall of Fame.