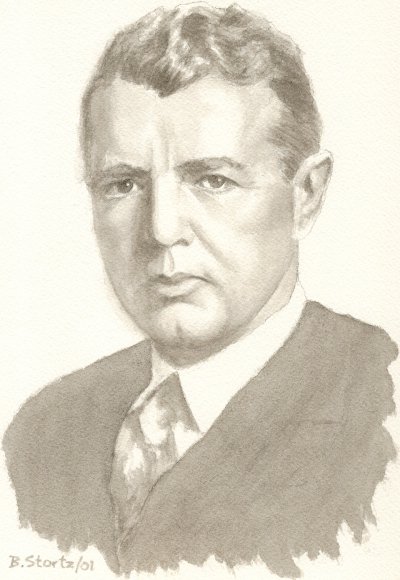 Joseph Michael Pigott’s prolific career left a legacy of prominent buildings. As a family man, a community advocate, a volunteer and business man, Joe Pigott set a standard of performance which few can match.

Born in 1885 into a construction family, he began working with his father, and soon stuck out on his own. As he would later say, it was natural for a young man to have ideas different from his fathers and a need to put these into action. He moved out west to start a company with his brother Roy. Following a successfully hospital bid, his father joined them. Later, upon his brothers return from WWI, he and Roy began to steer the Pigott Construction Company to its well known success.

His wider community contributions include time as President of the Art Gallery of Hamilton. Director of the Ontario Heart Foundation, Advisory Board member of St. Joseph=s Hospital, Member of the McMaster University Board of Governors, 1932 President of the Hamilton Chamber of Commerce and non-paid President form 1941-1948 of the government of Canada War Time Housing.

He was not so much a man of academia as a leader by intuition and intellect. His writings, conceptual planning, drive, and leadership came from what he called A A liberal education in the field@. One look at the long list of Pigott building projects easily demonstrates he learned well: the present City Hall, Royal Ontario Museum, Bank of Montreal (Main & James), Westdale High School, original McMaster Buildings, Hamilton Armoury, the Pigott Building and the Cathedral of Christ the King.

For the latter project, a labour of love, he was Knighted Commander of the Order of St. Gregory the Great by Pope Pius XI, he was a Knight of Magistrated Grace of the Sovereign and Military Order of Malta, a Hamilton Gallery of Distinction inductee, Commander of the Order of British Empire (CBE) and received an Honourary Law Degree from McMaster University. He served as a Vice President & Director of the Toronto Dominion Bank and North American Life Insurance Company. Director of Canada Permanent Trust, Artlas Steels Ltd, and United Fuel Investments Ltd.

On the death of Joe Pigott, McMaster President Dr. H. G. Thode was quoted by the Hamilton Spectator as saying AHamilton knew him as a builder of great imagination and strong courage. He will be mourned by men and women in all walks of life@. The most Reverend Joseph Ryan, Bishop of Hamilton said AWhen you have a man of such high position and such humble ways, you feel the loss even more.

Joseph Pigott may be gone, but his contribution and legacy remains, in buildings, in writings, his influence on the construction industry association development and in the development of industry standards.