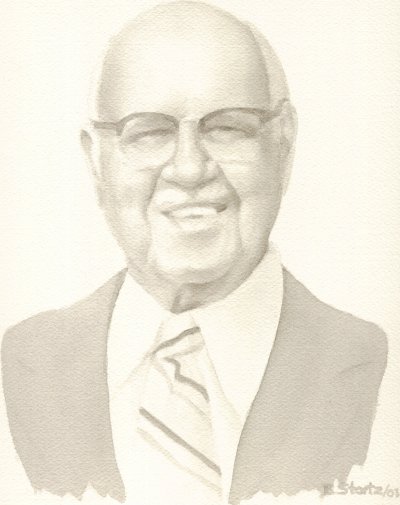 J. D. Kyles served in WW I – with distinction and honor in the Canadian Core of Cyclists. His return home was short lived for he ventured to New York city where he began a self-taught regimen to learn the discipline of building design. The task was daunting, except perhaps to John Douglas Kyles. Although he is not here to tell us, we might speculate that to him the journey was an adventure which would define his life work.

As Chief Designer, his first major project was the design and construction of the Michigan State Prison, then the largest US prison construction project. He handled it with the skill of experience despite his young years. Following his initial work, he returned to Hamilton and joined the architectural firm of Prack and Prack, where his skills were further refined. He designed Westdale Collegiate and the Pigott Building. Both projects were built by Pigott Construction.

His career was interrupted with further service during WW II as Captain of the 11th Field Artillery and service with the 13th Anti-Aircraft Battery in Hamilton. He returned to practice and soon created his sole practice which was then transformed into a major local architectural firm designing projects throughout Canada.

He started as Kyles, and was joined later by his son, Lloyd and the firm became Kyles and Kyles. Later still, Brian Garrett joined the firm and it became Kyles, Kyles and Garrett. Over the period of his career, spanning the post WW I period to retirement in the late 60’s, J.D. Kyles had a hand in over 300 school projects – including Dundas Parkside and Highland schools and Ryerson Public School, Holy Name Separate School and several other Hamilton area schools. His firm did 90% of the International Harvester projects in Canada and worked for many other corporations, such as National Paper Goods, Blachford and Wray Funeral Homes, Bank of Montreal, CIBC, and McMaster University. He designed the Nora Francis Henderson Hospital & Laundry, St. Joseph Hospital in Parry Sound, and other public sector projects.

The firm was renowned and its work prolific. At one time employing approximately 30 architects and students, including Stan Roscoe who went on to be City Architect and also John C. Rankin who became the Imperial Bank of Commerce in house architect and later the Ministry of Education Chief Designer.

ohn Douglas Kyles loved his profession, but not at the expense of family, community and a love of the outdoors. He was an active member of the Hamilton Club, Hamilton Golf and Country Club, Thistle Club and Hamilton Military Institute. He served on the Dundas centennial committee and volunteered with the Kinsmen. In the latter case, he designed, free, homes built by the Kinsmen and auctioned to raise money for the Milk for Britain program.

The legacy which we can see are the many structures designed by John Douglas Kyles. For his family the legacy is the care and devotion which he gave to them. He worked hard, and he also loved to be with his family. Married beyond 60 years to Margaret McDonald, they had two children, Lloyd and a daughter Koreen. Both children recall the interest in the outdoors and attention which J.D. gave to them. As with his work, John Douglas Kyles took his life and family responsibilities seriously.