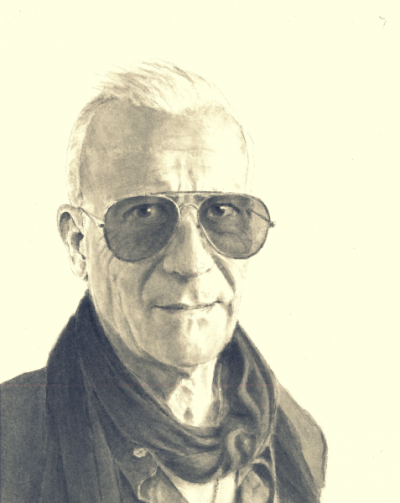 Jeff Feswick loves Hamilton. Talk to him for a minute, less, and his passion for our city shines through. He’s animated, larger than life; he has a big personality with an even bigger heart. The tagline of his business, Historia Building Restoration is “making Hamilton beautiful one building at a time”, and he means it. There are few buildings of significance in our area that Jeff and his team haven’t touched.

The youngest of four Jeff grew up in Ancaster and was a teenager in the late 70s. Not knowing what he wanted to do as a career he tried out a few things, disc jockey, car driver, even a stint at Stelco before taking a position at IMCO Limited as their Operations Manager. There he learned the skills associated with building restoration. Five years later he struck out on his own and opened Historia Building Restoration, he’s never looked back. Restoration immediately brings to mind old buildings but the field is actually much more broad and can include, plaster repairs and mural/fresco restoration, tuck pointing and masonry cleaning, even concrete and structural repairs.

Jeff’s commitment to personal relationships and quality workmanship has led to many repeat customers for Historia including the City of Hamilton, McMaster University and Theatre Aquarius.

Since opening in 1989 Historia has worked on some of the most iconic buildings in Hamilton including, the Right House, Hamilton City Hall, McMaster University and the Mills Building.

Historia Building Restoration joined the Hamilton-Halton Construction Association in 1998 and thanks to the influence of mentor Bill Filer of Filer Consultants Jeff became involved as a volunteer shortly thereafter eventually serving as President in 2006. One of the things Jeff is most proud of being part of during his time with the HHCA is the WSIB’s Advisory Board for the Construction Sector in Safety Strategic Planning. That body was responsible for the development of the Safety Group program and the HHCA was one of the very first Safety Group sponsors in the province.

Jeff’s love for Treble Hall led him to venture into the development world when he purchased the building in 2010. Designed by one of Hamilton’s finest architects, James Balfour, Treble Hall had been neglected since the 1960s and was mostly vacant. The restoration of Treble Hall was a labor of love, taking 5 years and nearly 2 million dollars. Selling the building to York Group in 2015 for further redevelopment was bittersweet for Jeff but he accepted that it was the right thing for Treble Hall and the right thing for Hamilton. He knew what the revitalization of a building like that could do for a neighborhood and he was right. For his work on Treble Hall Jeff was awarded the Architectural Conservancy of Ontario Paul Oberman Award for Adaptive Re-Use and a Property Excellence Award from the City of Hamilton.

Jeff’s other development projects have included the Tregunno Seeds Building purchased with partner David Premi of DPAI Architecture in 2013. Built in the 1890’s, the post and beam building was restored and re-purposed into one of Hamilton’s first co-working spaces, Seedworks Urban Offices. Another development project was 55 Wentworth Street South, once know as the Gold Key Club, a private club for Hamilton’s organized crime community run by the infamous Papalia crime family and now the home of the Theatre Aquarius Theatre School.

Jeff is committed, truly committed to the advancement of Hamilton. Over the years he’s given of his time and expertise to the HHCA, the Hamilton Downtown BIA, the Hamilton Cultural Roundtable, the Toronto Construction Association, Arts Hamilton, the Hamilton Local Architectural Conservation Advisory Committee (LACAC), Dundas Community Heritage Advisory Panel, and the Bay Area Arts and Heritage Stabilization Program.

He’s a sought after speaker and has lent his talents to the Hamilton Chamber of Commerce, the Hamilton Hive , the Invest in Hamilton Series and the National Heritage Trust Conference.

For the contributions of his firm and his own dedication to the construction industry and the Hamilton community , it is a pleasure to induct Jeff Feswick to the Hamilton-Halton Construction Hall of Fame.