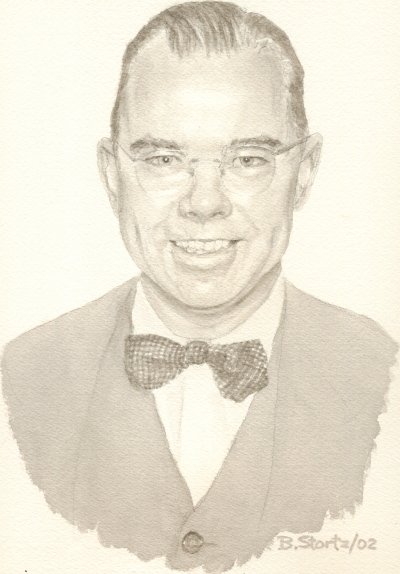 James S. Barclay served as a carpenter apprentice under his father who was a Yates Construction Chief Superintendent, also named James Barclay. As an apprentice he met fellow Hall of Fame inductee James Kemp and Hall of Fame member Ralph Cooper on the Dominion of Canada (Hamilton Post Office) project. Although born in 1910 in Ottawa, he maintained a love for his Scottish Heritage and the qualities it contributed to his work and family.

He learned early that his father would play no favourites; often at layoff time, James was top of the list. A man with a solid work ethic, when construction was slow, especially in the depression, James would take other jobs. Even at only a quarter per day, shoveling snow for the City of Hamilton was work he which “felt good to have”.

In the later forties and fifties, James worked as a general superintendent with Yates on the Otis Elevator Plant Expansion, Bell Canada, Chartered Bank and Steel Company of Canada projects. By 1953, with his experience, ideas for getting the job done and financial backing he began Barclay Construction Limited. He described the difficult first ten years as “trading dollars and treading water”. Those years would provide the essentials for a long-lasting company.

Among early projects, the Camp Borden Nurses Residence was wrestled from Eastern Construction at a low price. A struggle for financial independence, and some soul searching, led to a key decision to bring his son, a graduate of Architectural Technology and also a Jim Barclay, into the business. Jim Sr. worked the outside and Jim Jr. handled the inside estimating and paperwork duties.

With reduced overhead, ingenuity, and a forward outlook, the two “Jim’s” never looked back. Focusing on the customers’ need they embarked on projects such as The Hamilton Savings and Loan Building, McMaster Ratskeller, various Royal Bank and Bank of Montreal branches and serving the primary steel industry.

James S. Barclay devoted time to United Way fundraising and church activities. He maintained a family-oriented existence – in life and in business. He enjoyed Dixieland music and was proud to be the “Lefthanders” Champion at Hamilton Golf & Country Club.

Perhaps one of the best ways to understand the contribution made by James S. Barclay is to know two things. First, his love of contracting led to the creation of a family firm now into its third generation. Even in retirement and until his death in 1999, James Barclay provided continued focus and advice to those who carry on the business today. Secondly, he understood the value of each man. There was not a man he couldn’t look squarely in the eye and acknowledge.

These qualities are the basis for Barclay Construction Limited producing quality projects. They reflect in the way he treated his employees and helped in the community, and they are embodied in the legacy that is the present-day construction business. Now in its third generation, these same values support our community through the work of Barclay Construction and its employees.

It is a pleasure to include James Simpson Barclay as a member of the Hall of Fame.