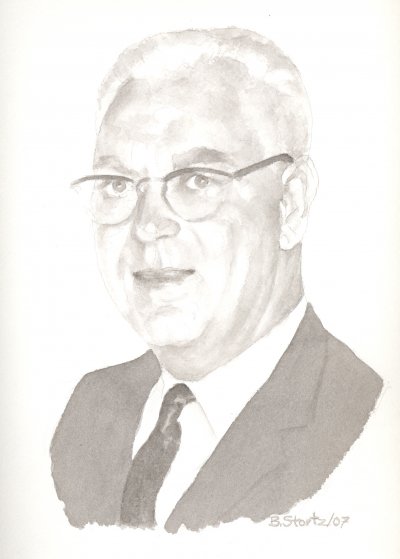 Ira McDonald was first and foremost a contractor. Each available minute of his life was spent in the pursuit of serving his clients and building a business to secure his family’s future. It was a personal pursuit, as he remained focused on his clients’ needs, and how he could best make their project a reality. From building industrial structures to the construction of a family cottage, Ira believed in and lived by a personal work ethic which centered on excellent service.

Born in 1913, in Meaford, Ontario, Ira was the youngest of 13 children. Farm country was in his blood and would be the first place young Ira put his interest in the construction of buildings to work. He was educated at public schools and as a young man, began his illustrious career in the construction industry in his home town. In the 1930’s, Ira began building barns, farm buildings and farm houses with Gristenwaite and Robinson, and took to the trade like a natural.

Despite the spectre of concern that accompanied the diagnosis of Ira’s serious thyroid condition, which in the 1930’s offered limited hope of survival, Ira overcame the odds. After a year of recuperation in Hamilton’s McGregor Clinic, Ira embarked on his dream of owning his own construction business in Hamilton, which grew modestly with every $5 deposit he made at the Royal Bank Branch at Main and Locke Street. Ira built custom homes for many high profile individuals while also completing many local renovation projects including custom kitchens, bathrooms and home additions.

The business prospered in the 1950’s as Ira McDonald become well known for its’ commercial work, completing a mix of subcontract work for firms such as A. Cope and Sons, or working directly for the Royal Bank, CHCH TV, Kenilworth United Church, Stoney Creek United Church, Gordon Skinner store renovations, renovations for HAVCO, Mills Family Lighthouse, Messiah Lutheran Church, Pineland Presbyterian Church, and the Association of the Mentally Retarded.

In 1961 Ira McDonald was awarded the contract to build the Parkdale Medical Centre, designed by fellow Hall of Fame member Stanley Roscoe. The contract award was made in Ira’s living room by Dr. R. McMillan. Ira also constructed the Lockwood Motors Studebaker dealership at Highway 8 & 20 during that time.

Whether building home subdivisions, or working with community leaders in Hamilton, Ira demonstrated in each instance integrity, honesty and client based practices before the phrase “client satisfaction” was entrenched in business culture.

Ira dedicated his life to creating a company which could strike a deal on a handshake, succeed in serving the client’s interests and also provide a good living for his family. His vision for success included the knowledge that his children would be well looked after and would have the same opportunity to serve others in their community through his beloved “Ira McDonald Construction Ltd.”. He believed in sacrificing today in order to have a better life tomorrow, a belief that sustains the company that bears his name. For Ira, knowing that he could take part in the building of his own community through his company while enjoying the simple pleasures of family life, proved to be life’s great reward.

With his wife Ruth, Ira embraced a set of values, first and foremost dedicated to parenting, religious devotion, and to his community. Ira and Ruth raised four fine children: Larry, Lynda, Dale and Wynn and taught them many life lessons through their fine example. Ira led by example and encouraged his children to adopt the same life principles. A founder of the Stoney Creek United Church, a member of the Hamilton Optimists, the Masonic Lodge, the Ad & Sales Club and the Hamilton Builders Exchange, which was the precursor to the Hamilton-Halton Construction Association, Ira committed himself to his community.

Ira died in 1971, and as he hoped, his company lives on today, creating more memorable projects, places to live, play, learn and work. Today we remember him as a successful leader who sowed the seeds of a successful company that still bears the name, “Ira McDonald Construction Limited”, and is operated under the able leadership of his three sons. For the fine example of excellence, dedication and interest in doing the very best, we are pleased to induct Ira E. McDonald into the Construction Hall of Fame.