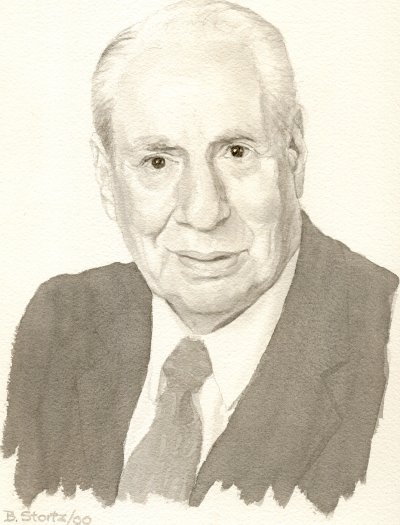 Very successful people in construction often arrive without a road map to their destination.  Elmer Farkas was looking forward to a career with Ford in Windsor when his father-in-law, Joseph Minster called upon him to be his eyes at the Hamilton branch.  Ford accommodated a year sabbatical.  That turned into two and his friends at Ford suggested he could return whenever he liked.  The short hiatus became a lifetime.

National Painting and Decorating (Hamilton) Ltd. was adopted here and became a loved son of the industry.  Over the years Elmer’s way brought success.    He warmly accepted his staff into a family style of business, always wanting them to succeed as well.   His firm gained a reputation as an on budget and on time subcontractor.

Major projects were a lifeblood for National.   Among them, Elmer can proudly point to the Hamilton Convention Centre, Jackson Square=s three phases, Centre, Limeridge and Maple View malls, CHCH-TV, CIBC Commerce place, and Hamilton General Hospital. National was a proud painting and sandblasting contractor to major clients such as Stelco and Dofasco.  No project was too small or too large. The firms’ work on the Burlington Skyway bridge provided evidence of its ability.

Elmer enjoyed renown in many other community activities.   A 32nd Degree mason, Elmer is a firm supporter of the Scottish Rite.   He helped well-known D.O. Davis initiate the Junior Achievement in 1969 and only finished his volunteering with them in 1992.    A long time Brith member, a 45-year Dundas G & CC member and an avid pilot, Elmer sure made life worth living.    At Shalohm Village, he helped with services and eventually was instrumental in the building of its new facilities around the corner from his office.

Recognizing the importance of the industry which gave him a comfortable living, Elmer was quick to involve himself in the associations. He is a past director of the Ontario Painting Contractors Association and Federation of Painting Contractors of Hamilton. He served as Director of the Hamilton Construction Association. He understands the importance of roots and donated, in honour of his father-in-law, a painting to Construction House of Hamilton, now proudly hanging in the Board Room.

Elmer is well known for his generous spirit and friendliness.  He is a character among entrepreneurs, and for us his legacy is building a subcontractor that served generals and major clients alike.