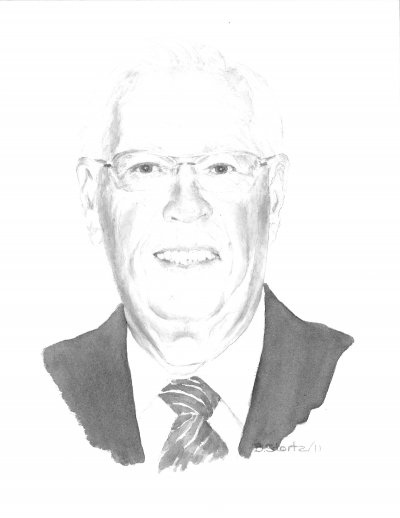 Upon completing high school, Ted joined Sidney Woods, a local respected Land Surveyor. What a great experience for a young man, to be outdoors and charting acres of land! He worked on numerous surveys during his time there, and is particularly proud of the layout of the 403 Highway from #53 Highway through Ancaster to Main Street in Hamilton adjacent to the Chedoke Golf Course. All involved with construction know we are reminded of our work each time we pass a location where our labour was put to good use; undoubtedly Ted remembers this early work when he drives along this stretch of the 403.

The experience provided Ted with a desire to continue in construction and led him to join Frid Construction in January 1955 as a layout person on the No.2 Blast Furnace in Dofasco. He worked on many projects in both Dofasco and Stelco, as well as other industries along Burlington Street in Hamilton.

In 1969 Ted joined Mr. Larry Paron in the formation of Paron Construction Eastern Ltd. and carried out numerous projects; notable early year projects included arenas at Mountainside in Burlington, Ancaster and Brantford. They also constructed 9 Senior Housing projects out of their Hamilton Main West office comprising of 1365 units in total, in Timmins, North Bay, Brantford, Woodstock and Guelph. These were all concrete structures and included the restoration of the long deserted tower at Main and Hess, now home to Hamilton Housing Authority.

Ted began his association with the HCA as a member of its Building Committee when Bob Fenton was the Association manager and continued his involvement by participating on the Membership Committee during Ron Martin’s term as President, Ron being another Hall of Fame member; Ted contributed to the work of increasing the membership by over 200 member firms by encouraging more suppliers as well as construction buyers such as Stelco, Dofasco and several others to become members. He served on the Board for a number of years including serving as President in 1976.

He was also instrumental in bringing the Christian Trade Contractors group into the Association. He served on the Christian Trade Union Pension Fund Advisory panel and was active in their Labour negations. During his time in the HCA Association, he established for himself the goal of continually giving back to his industry was determined to continue serving through various Industry Associations with which he was affiliated, including:

-CCA Board of Directors

Ted’s determination to increase the professionalism of the industry through education, helped to create the basis for recognizing the talents of those in construction trades. The Gold Seal Certification adds an element of validation to those skills and helps when marketing one’s services to clients.

In recognition of this contribution, Ted was honoured by the CCA with the establishment of the “Ted Wyatt Trophy” which is presented to the Industry Association which demonstrated the most to promote Education and Gold Seal.

Ted has spoken to the students of Mohawk College CET program on several occasions and hired several from the program upon graduation. Another example of his dedication to the industry and education.

His involvement extended beyond just the construction industry, to include many community and youth activities including coaching baseball and hockey in Ancaster and being the President to the Ancaster Minor Hockey League twice. He also served as Scout Leader and later on as a member of the Scouts Group community.

His interest and passion for the industry remains strong even today in his retirement. He has a stellar career in the industry providing excellence in service and tremendous support to others coming up through the industry. He completed interesting work and led many projects that remain in operation today.